The Forest of Sabine: a perfect symbiosis!

I have a confession to make. Over the last year or so, the demands of study and work plus my allergies to ticks, leeches and many pollens have kept me from giving the attention to our garden that it needs and deserves. My negligence has been compounded by a higher-than-normal rainfall over summer. 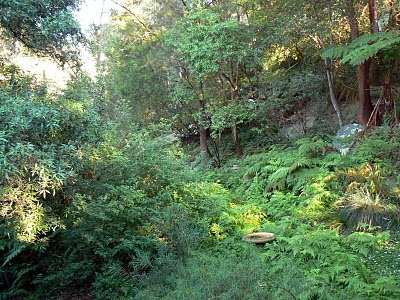 From verandah.
That disc-shaped object in the foreground of our front garden is a drowning bird bath. Many of the plants I've put in have struggled to get enough light to survive.

Bad, naughty, wicked Margaret.
But a month or so ago, I was in a queue for coffee at Macquarie, and noticed a woman standing near me whom I recognised by sight.... Perhaps a biology post-grad? So we started chatting, and I asked her how her research was going. Good, she said, but she was having a problem. She needed a site in Sydney to grow some plants for her PhD experiment and was having trouble finding one. What sort of site did she need, I asked. Oh, something near bushland, sandstone substrate, sandy low-nutrient soil. Hmm, I mused. How much land? Enough to plant around eighty plants, ranging from trees to shrubs, all Sydney natives.
And thus began the perfect symbiosis. The PhD student is Sabine Nooten, and here she is:

Sabine is doing her doctorate with Professor Lesley Hughes (the Head of the Department of Biological Sciences), in the Plant-Insect Interactions and Climate Change Ecology Lab (PICCEL). You can read about her research here. As part of her work, Sabine is attempting to predict aspects of insect herbivory in the future: how plants and insects will interact as a result of climate change when Sydney's climate gets as hot as it is currently near the NSW/Qld border. She's been growing huge numbers of specimens at Macquarie University's Plant Growth Facilities (where I've studied and worked over the last year or so) for her various sites, and in the last few week or so, she and sundry colleagues/friends have been planting many of them in our front garden. This will be her control for the experiment. First, of course, she had to ensure that the soil was right. Not too many nutrients, to make it representative of the natural soils of Australia. Unsurprisingly, it passed the test.
(Side note: Australia's soils are really, really old. The last Glacial Maximum (ice age) ended around 10,000 years ago. Glaciers scraped the surface off the bedrock of Europe and North America, so all the soil that has been deposited there subsequently is really a bit of a baby. Australia, by contrast, has had a relatively stable geology for many millions of years. We don't have much topsoil, and what we do have has been subject to massive erosion and has been leached of nutrients. Our flora has evolved to deal with this, which is why, for example, Australian plants are intolerant of what in Europe and North America would be normal levels of phosphorus. Hence "native plant fertiliser"--low on the stuff that hurts our plants.)
Sabine and her mates have cleared the bracken and planted a number of species, most of which are indigenous to our general area of Sydney: This species is in the same genus as a plant I recently propagated from seed, and am now growing in the garden, Hakea sericea. Both have similar large, tough seed-pods and seriously sharp, hard leaves. And this is what the front garden looks like now: From driveway.
Sabine is delighted to have a place to grow her plants where they're protected from vandals/wandering drunks/morons who don't quite understand how precious a PhD experiment is, and where they'll be watered and generally loved. (The fencing is to keep out the dreaded Swamp Wallabies.)

But she can't possibly be as thrilled as I am. All these plants! The bracken gone! What will essentially become a forest in our front yard!
Once the experiment is finished (in around 18 months), I'm going to put in some local understorey plants. But I'm quietly hopeful that they'll emerge naturally. The soil is full of seeds of local plants, just waiting for the right conditions to germinate and grow. Finally, I think they might just get their chance.
So how win/win is all that?!
I'll update the process, once the plants start to take off. Watch this space, come spring.

Hi Margaret
What a nice garden you will have. I think you are the lucky one. It's great that Sabine planted all this plants in your garden. I hope you make a lot of photos and you will send them to me.
Jeanne

Thanks Jeanne! I hope next time you and Pierre come to Australia, you'll see a beautifully transformed space. I'll definitely send you photos.

Hi Margaret,
what a great project. I wish I had a Sabine. We purchased a large block last year and I am now trying to revegetate it with local indigenous plants. Must admit that have been very fortunate as we have a creek at the bottom and so Melbourne Water is giving us a grant of 1000 plants - tube stock to get started. At the moment it looks like a scorched earth policy because of all the weed trees that have been removed.
Look forward to seeing your garden grow.
cheers Natalie - Mt Eliza - Melbourne

Wow, you have a task on your hands. Exciting, though. There are few things more thrilling than restoring a patch of earth like that. Just think of the fauna you're going to attract back! I'm going to follow your project on you blog, too.