The Evolution of Chloroplasts: endosymbiosis and horizontal gene transfer

Chloroplasts are the machines of life, upon which we heterotrophs (organisms which can't create their own food, but instead rely on eating other organisms) depend. Their evolution massively transformed the earth itself, changing the air by dramatically increasing atmospheric oxygen essential for animal life, and providing an energy source. 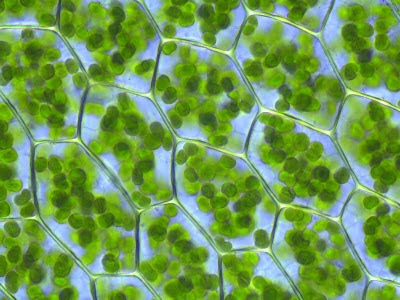 Micrograph of the cells of a moss species, Plagiomnium.
The round green organelles are chloroplasts. [Source]

All green plants contain chloroplasts, amazing molecular machines which use carbon dioxide, water and photons from sunlight to create sugar and oxygen. The oxygen, so precious to us, is in fact a mere waste product of the reaction. This is the process called photosynthesis: 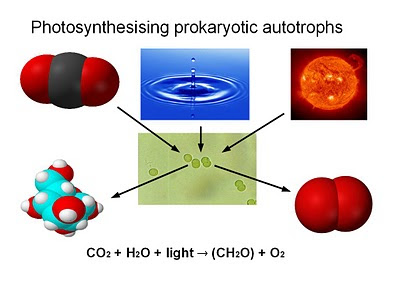 The story of how plants evolved the ability to perform this chemical feat begins around 3.6 billion years ago. That was before multicellular organisms appeared, and indeed, before eukaryotic cells evolved. (A eukaryotic cell is one with a membrane-bounded nucleus (containing DNA) and various organelles performing specialised functions.) The only living organisms that existed were the prokaryotes, which were much less complex. Prokaryotes have a very different type of DNA structure. Instead of being wrapped around histones in the familiar X-shaped chromosomal form, they are circular.
One type of prokaryote, cyanobacteria, developed the capacity to use energy from the sun to power its metabolic needs. We see the ancient remains of these early autotrophs today, in the form of stromatolites, layered, fossilised structures like these at Lake Thetis in Western Australia: 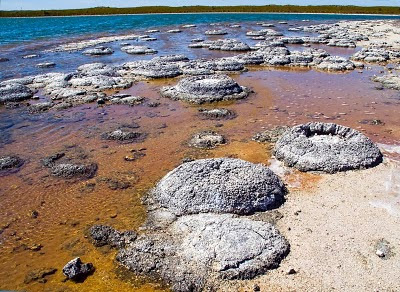 [Source]
The ability to use sunlight as a means to make their own food provided photosynthesising prokaryotes with a huge competitive advantage, and they rapidly populated the earth's oceans and lakes. The oxygen they emitted as a waste product led to what's known as the Great Oxidation Event, around 2.4 billion years ago. We can see evidence of this event in rocks from the era. Here is sedimentary rock containing black-banded ironstone, showing the oxidation of iron. 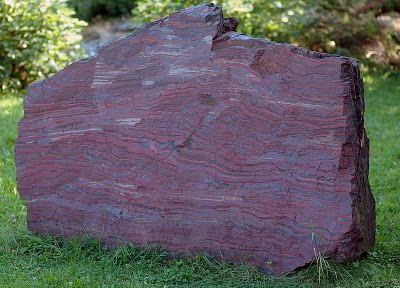 [Source]
About 2.7 billion years ago, another remarkable change was occurring: the evolution of eukaryotic cells. This entailed the process of endosymbiosis [Gk: endon "within", syn "together" and biosis "living".] In endosymbiosis, one organism engulfs another and incorporates it into its own body or cells. It's important to remember that this takes place by invagination: think of pushing your finger into the side of an inflated balloon. Your finger is surrounded by both its own external membrane (your skin) as well as the membrane of the balloon itself. Now imagine (and sorry, the metaphor gets a bit gross at this point!) that your finger falls off and the balloon seals itself up again. Now your finger is inside the balloon, wrapped in a double membrane. That endosymbionts evolved by this process is evidenced by the fact that they have a double membrane, including their own original form that resembles the ancestral bacterial surface.
Below is a graphic I've put together to show the two crucial stages in the incorporation of photosynthesising prokaryotes into proto-eukaryotic cells, leading to a true eukaryotic cell with both a mitochondrion and a chloroplast. 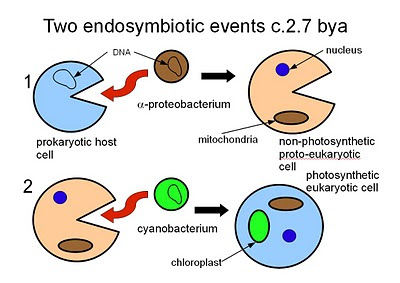 Although only green plants possess chloroplasts in their cells, all animal and plant cells have mitochondria, a specialised organelle that oxidises (burns) sugar and provides energy for cells to work.

Note that the DNA of the proteobacterium and the cyanobacterium are circular, compared with the condensed nucleus of the proto-eukaryotic cell. This structure continues down the lineage. Mitochondria and chloroplasts have their own, circular DNA that replicates independently from the DNA in the cell's nucleus.
The first organisms resulting from the endosymbiosis of cyanobacteria were the green algae, the direct ancestors of all modern plants. 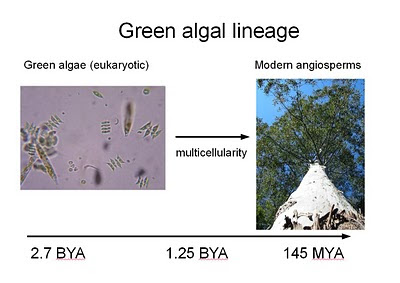 Chloroplasts, able to perform feats well beyond human technology--the efficient splitting of water into hydrogen and oxygen, and the synthesis of sugars from water and carbon dioxide to chemically store energy--are extremely complex structures. A crucial protein in the creation of sugar (during the Calvin Cycle phase of photosynthesis) is Ribulose-1,5-biphosphate carboxylase oxygenase, commonly known as RuBisCO.
Over the course of plant evolution since the original endosymbiotic events, interactions have occurred between genes in the chloroplasts, nucleii and mitochondria. Some genes have disappeared because they are redundant to the organism (both doing the same work in synthesising proteins), and others have physically moved from one organelle to another. The latter process is known as horizontal (or lateral) gene transfer (HGT). Thus, in RuBisCO, some of the protein chains are synthesised by the DNA in the nucleus (nDNA), while others are synthesised by the DNA in the chloroplasts (cDNA). In an astoundingly intricate dance, the cellular machines work together to create what is one of the most important organic molecules on earth. Without it, we and all the other animals on earth wouldn't be here. 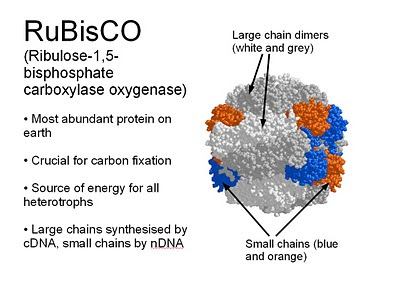 Before I finish this rather long post (and if you're still reading, thank you!), I just wanted to mention the mysterious case of the klepto-plast slug.

[Source]
This gorgeous creature is Elysia chlorotica, the Green Sea Slug. And it photosynthesises! Just think about that for a moment. An animal capable of making its own food by using light from the sun. Wouldn't you love to be able to do that? It'd certainly solve the global energy crisis, but perhaps a green hue wouldn't suit everyone's taste.
The Green Sea Slug eats algae, and incorporates the algal chloroplasts into the spaces between its own cells. It differs, however, from the endosymbiosis of plant chloroplasts, because in this case there is no horizontal gene transfer. Once the algae in the slug die, that's it. The slug needs to eat more to keep photosynthesising. It's tempting to think that this might be an evolutionary stage towards a truly autotrophic animal, but apparently too much damage is done to the chloroplasts as they travels through the gut of the slug, and the chloroplasts can no longer replicate themselves.
Pity.
This post was adapted from a genetics seminar I recently gave as part of my studies. If you'd like to read more on the topics raised, here's some further reading:
Archibald, J.M. & Keeling, P.J. (2002) Recycled plastids: a 'green revolution' in eukaryotic evolution. Trends Genet 18:11:577-584.
Delwiche, C.F. (1999) Tracing the thread of plastid diversity through the tapestry of life. The American Naturalist 154 Supplement:S165-S177.
Gould, S.B., Waller, R.F. & McFadden (2008) Plastid Evolution. Annu. Rev. Plant Biol. 59:491-517.
Keeling, P.J. & Palmer, J.D. (2008) Horizontal gene transfer in eukaryotic evolution. Nature Reviews: Genetics 9:606-618.
Keeling, P.J. (2009) Role of horizontal gene transfer in the evolution of photosynthetic eukaryotes and their plastids, in Gogarten, M.B. et al. (eds.) Horizontal Gene Transfer: Genomics in Flux, vol. 532: 501-515.
Martin, W. & Schnarrenberger, C. (1997) The evolution of the Calvin cycle from prokaryotic to eukaryotic chromosomes: a case study of functional redundancy in ancient pathways through endosymbiosis. Curr Genet 32:1-18
Smith, A.M. et al.(2010) Plant Biology, Garland Science, New York.
Taiz, L. & Zeiger, E. (2006) Plant Physiology, Sinauer Associates, Sunderland, MA U.S.A.
UPDATE: This post was featured in the May 2010 edition of Blog Carnival of Evolution, this month hosted by the official blog for Springer Verlag's journal, Evolution: Education and Outreach! I feel chuffed.
FURTHER UPDATE: This post also won the 3 Quarks Daily 2010 Prize in Science "Charmed Quark" award. Which makes me exceeding happy.