Some wise words from Steven Pinker.....

"I think that a failure of statistical thinking is the major intellectual shortcoming of our universities, journalism and intellectual culture. Cognitive psychology tells us that the unaided human mind is vulnerable to many fallacies and illusions because of its reliance on its memory for vivid anecdotes rather than systematic statistics. Yet pundits continue to hallucinate trends in freak events, like the Norwegian sniper (who shot all those young people on an island) and make wildly innumerate comparisons, such as between Afghanistan and Vietnam, or between today's human trafficking and the African slave trade. It's a holdover of the literary sensibilities of our science-flunking intellectual elite, who would be aghast if someone didn't know who Milton was, but cheerfully flaunt their ignorance of basic science and mathematics. I lobbied – unsuccessfully – for a course requirement at Harvard in statistical and logical reasoning."--Steven Pinker.

He is utterly correct on the failure of communication between the arts and the sciences, and as one who has been positioned pretty evenly between them, I must say that I think those in the sciences tend to be far more intellectually fluent in the arts, than vice versa.

The quote comes from an email interview by John Naughton in The Guardian about Pinker's new book, The Better Angels of Our Nature: The Decline of Violence in History and its Causes. It's on my list! 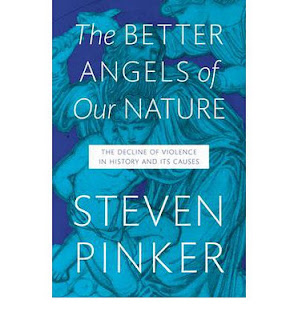 Hear hear - this book should be on everyone's reading list! Pinker is an engaging writer and picks fascinating subjects to write about...