It's a few years since I last visited Muogamarra Nature Reserve, which is just north of Sydney and on the southern side of the Hawkesbury River. But today returned with some fellow biologists from Macquarie Uni. The flora was as bogglingly diverse and plentiful as ever, but today a fascinating native bee caught my eye. 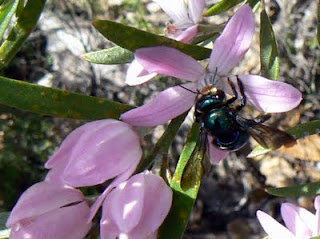 This is the Peacock Carpenter Bee, also known as the Metallic Carpenter Bee, Xylocopa bombylans. Given its colouration and metallic shine, at first I thought it was a beetle, but closer examination showed its distinctly beelike nature.
The bees were busy feeding at the copious flowers of Eriostemon australasius, the Pink Wax Flower. 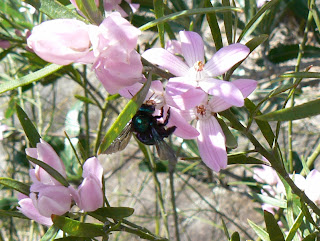 Eriostemon is a genus in the family Rutaceae that's recently been split by the taxonomists, with most of the species being transferred to the genus Philotheca. Only Eriostemon australasius and E.banksii remain.

The Peacock Carpenter Bee is so known because of its colouring and life-cycle. Depending on the angle of the reflected light, its colour changes from blue to green to purple. And as for their carpentry, this is what the Australian Museum has to say:


The nest of the Peacock Carpenter Bee is usually a single tunnel about 30 cm long with interconnecting passages when the wood is wide enough. The tunnels are sectioned off into brood cells, which are sealed after an egg is laid inside with a supply of nectar and pollen rolled up into a moist ball. When the eggs hatch, the larvae eat the food balls and pupate.

Female carpenter bees sometimes cooperate during brood rearing, taking it in turns to guard the nest entrance while the main egg-laying bee goes out foraging for nectar and pollen to feed the larvae. [Source]

The bee grows to 1.8 cm in length, feeds on nectar and pollen, and is found in Eastern Australia north of Sydney. 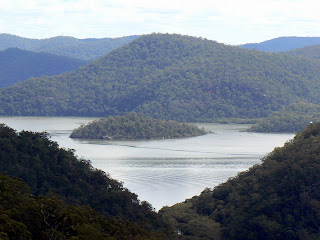 If you're planning a trip to Sydney, I really urge you to time your visit for when Muogamarra is open to the public, a few weekends in late winter/early spring. It is a beautiful place. I've put more photos from the day, including plenty of plant shots, on Picasa, here.

I was just admiring green metallic bees in my California garden.

Bees are so fabulously diverse, aren't they? Their social structure, their appearance.... Great taxa!

Great find, Margaret.
Makes me wonder if I have dismissed these guys as strange shiny "flies".
This Spring is looking great for wildflowers in the Sandstone Heath country, so it is great for Bees and other insects too.
Cheers
Denis

I'm quite sure I have too, Denis. You're right, it's looking like it's going to be a fecund spring!