Guest Blog by Julia Cooke, author of "My Little World".

I'm delighted to welcome guest blogger, Julia Cooke, author of My Little World, a picture book for children. Julia is on tour in the blogosphere - see here for tour dates and places!


Getting the science right in
My Little World
My Little World is the story of a child finding a world of tiny animals and plants when they can’t see the birds and mammals that the grown-ups see on a bush walk. The main message is that you can find the most amazing things by looking carefully - and a different perspective can be useful too. But how could we encourage careful observation in a reader unless we had taken care in selecting and presenting real species? 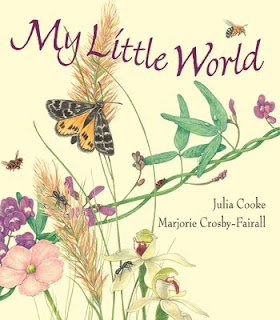 Full credit for the illustrations, of course, goes to award winning illustrator Marjorie Crosby-Fairall. Her use of colour to create different micro-habitats and her attention to detail is magnificent - to me the pages are bustling with life. I can’t speak for Marjorie about the production of the beautiful illustrations, so this post will focus on some of the research behind them in which I was involved.

My Little World is set in Canberra, the bush capital, on Black Mountain (it has the iconic telecommunications tower on top). I visited the site, took photos and wrote the story around what I had seen. This research was sufficient for my English assignment (the reason I wrote the book in the first place), but when it came to producing a real book, we needed more species and full identification. As a plant ecologist, I could use my knowledge of scientific resources to contribute species lists, reference images and check details for Marjorie. It was very different research to my normal studies, and it was fun but quite a challenge!

Creating a plant list was facilitated by online records that amateurs and professionals had compiled (including from online herbaria) specifically for Black Mountain and I could identify species on the mountain myself. My Little World includes several species of eucalypt (red box, red stringy bark, inland scribbly gum, candle-bark gum) and a range of plant families including Poaceae (kangaroo and white-top wallaby grasses), Fabaceae - Mimosoideae (red stemmed and box-leaf wattles), Fabaceae - Faboideae (purple coral pea and twining glycine), Liliaceae (nodding blue lily) and ferns, a moss, a sundew and an orchid. The book is set the book in October, when many species are flowering and we used floras to check flowering times.

For invertebrate species I identified the species I had seen on site and searched the online records from the Australian National Insect Collection (ANIC) for species collected on Black Mountain and Canberra. The search was a great starting point (possibly the location of CSIRO Entomology/Ecosystem Sciences at the foot of Black Mountain helped!), though not all ANIC records are available online. Other species, such as the blue-banded bee, I was introduced to at a friend’s house and was delighted to be able to include. I also wrote to more than a dozen researchers, often with suggestion of species to check details of their distribution and for reference images and sometimes for the suggestion of a snail or fungus for which readily available records and information are more limited. The generosity of the people I contacted was amazing. A range of insect orders are featured including Hemiptera, Coleoptera, Orthoptera  as well as a spider (Araneae). We chose species that are easily seen, and those that are harder to spot such as the pollen feeding katydid (Zaphrochilus australis).

Marjorie needed good reference images for all species. The internet was a wonderful resource providing ready access to both amateur and professional pictures.  Where an image was heavily relied on, we contacted the photographer for permission to use their images or to request a higher resolution images. Again, we received very generous responses. For some species, photo references just were not available.  Line drawings and scientific descriptions were used, and in some cases we took further reference images ourselves. I photographed scribbles, the mines of the larvae of Ogmograptis spp. (which differ in morphology between Eucalyptus species), and I photographed the head and wing scales of a Meadow Argus specimen borrowed from a university colleague.

As with the plants, we checked the phenology of the animals to ensure they could be seen in October.  The Christmas beetle (Anoplognathus montanus) which, as their name suggest, are often abundant in December, may be stretching this a little, but as there were several records of Christmas beetles on Black Mountain from October, I let it in!

Species with contrasting distributions were also selected. The meadow argus (Junonia villda) is found throughout Australia, so almost any reader in the country could see one. But then there are other species that have a much more limited distribution, such as the lemon cap orchids (Caladenia cucullata). It is the suite of species rather than an individual species that make it specific to the Canberra region. We included two endangered species, the sun moth (Synemon plana) and perunga grasshopper (Perunga ochracea), which may now be extinct on Black Mountain, but could still be found there and deserve attention.

During this process, I realised that an illustration shows more than just morphology. The illustrations depict behaviours, interactions and species co-existence - the way a bee flies, the pattern on a spider web, the way a caterpillar moves. There is a eye-patterned gum hopper (Platybrachys vidua) on one of the early pages. When I first wrote the book, the gum hopper I saw was on some grass - I spotted it because the brown animal stood out against the green leaf. The nymphs are more normally found, but better camouflaged, on eucalypt trunks, but are easily disturbed and jump away, often ending up in unlikely places. So, was it better to present typical behaviour or what I actually saw? In this case I chose to portray what I had seen (though a grass tree was substituted for some grass) and we did put a eucalypt on the page too, as a reference to their their normal habitat.

Most of the species in the book have their common name written next to them, cleverly incorporated by the designer so that they do not distract the eye from Marjorie’s illustrations.  At the back of the book I have provided notes on the focal species from each page, giving the scientific name and some brief ecological details. I hope children will ask questions about the plants, animals and fungi they see in the pictures and these names and information will provide some of the answers. I've compiled teacher’s notes too (available here) that use the book to introduce life cycles, nature diaries, phenology, scientific names, animal behaviour, animal signs, micro-habitats, camouflage, valuing invertebrates and many other issues that are scientific but accessible, important and fascinating for children.

I hope My Little World makes a small contribution to encouraging children to delight in and appreciate nature, and in turn to conserving the natural world. It is unlikely that you would find all the species depicted in My Little World if you went for one walk on Black Mountain, but you could find them there. I’m sure I didn’t get all the details right, but I gave it my best shot and hopefully readers will appreciate that.

(I'm on tour in the blogosphere - see here for tour dates and places!)

Fantastic. I am glad to hear that you are making the effort to get the science right. I would definately buy this for my daughter.

Thanks so much necklace. There are so many fascinating plants and animals around - I can't see the need to make up details when reality is so amazing. I hope your daughter likes it! Cheers, Julia.

Wow!Great to look through this site Julia. Thanks for sharing this. I can imagine the effort, hard work and also excitement while you're doing your book and all the researches. Very impressive.

Your book is going to be an exploration to the world of those tiny species. Great job!