Thirty years ago, I was a law student. I lived in the inner city of Sydney, next door to a lovely fellow, who was young, pretty and gay. I'll call him Carl.

Carl liked the odd toke of the odd joint, and one day, he'd just bought a generous deal of cannabis. He was busted, arrested and sent to court. I accompanied him. I was only in second year at law school, so couldn't do much apart from hand-holding. He received a custodial sentence of 6 months. I remember the shock I felt as he was taken away, the look on his face.

Some weeks later, Carl rang me from Long Bay Prison. He was in despair, being raped nightly, and he begged me to help him. He gave me the name of his defence solicitor, to see if I could ask him to do something.

I rang the lawyer and explained what was happening. "Sorry," he told me. "I don't do after-sale service." They were his exact words. I was gobsmacked. Apart from the sheer financial selfishness he demonstrated, his lack of compassion was breathtaking.

So I contacted Redfern Legal Centre, a community/poverty law organisation largely staffed by volunteers, and made an appointment with their full time lawyer running the Prisoners' Legal Service. The woman I saw was understanding of my friend's plight, and put him down on her prison visiting list. She couldn't get him out of gaol, but she could give him advice and comfort. She helped him a lot.

This woman transformed my ideas about the law. I became a student volunteer at Redfern Legal Centre, working one night a week, and when I qualified, continued volunteering at nights at the Illawarra and Parramatta Legal Centres. She was smart, completely lacking in pretention, no bullshit, and incredibly well able and willing to take on the bully boys (and they were largely boys) in the legal profession and police.

Today, that woman was made one of the seven judges of the High Court of Australia, the highest court in the country. Virginia Bell, after Redfern Legal Centre, went on to private practice and Public Defender work, as a solicitor and then at the Bar. She was appointed to the NSW Supreme Court in 1995.

Virginia, as a Supreme Court judge, ruled that it is not defamatory to call someone gay, a landmark decision. She was a participant in the first Sydney Gay and Lesbian Mardi Gras in 1978, and defended some of those arrested for participating. Basically, the woman is a star and her appointment is a real milestone, and not only because she's only the fourth woman and the second openly gay member of the High Court bench (replacing the first, Michael Kirby), but because her record as a level-headed defender of human rights and social justice.

I am proud to remember High Court Justice Bell from way back when. And I think Carl will remember her well too. 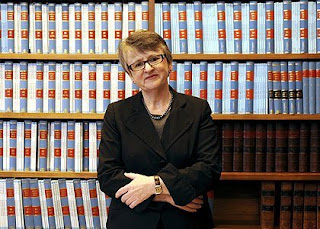 Oh, and on a completely different note, this blog's just been included in the Top 100 Botany Blogs by a group called "Online College Blog". Colour me chuffed! Thanks to whoever let them know about my little corner of the Net. :)

Email ThisBlogThis!Share to TwitterShare to FacebookShare to Pinterest
Labels: Nothing to do with biology, Top 100 Botany Blogs

Great to read about Virginia Bell being made High Court Judge; sounds like the appointment was well-deserved. Congratulations to her and to you also for making it into the Top 100 Botany Blogs at Online College Blog!

Thanks for sharing this. I hope Carl made it out of there in one piece.

Thanks, Diane and Bjorn.

As for there being so many botany blogs... well, since I made the list, I hope there aren't only 101!

Hey Margaret
Delighted to see that in the joy of your new career, you haven't forgotten the struggles of the old life.

I am delighted Virginia Bell got the tap on the shoulder. We live in a sophisticted world but we are very very far from women accounting for 51% of all all important, decision-making appointments.

It also suggests that successful women mentoring younger women in their professional life could still be an important role, in law and elsewhere.

Anyhow welcome to the wonderful world of blogging from another late comer to the blogging world,