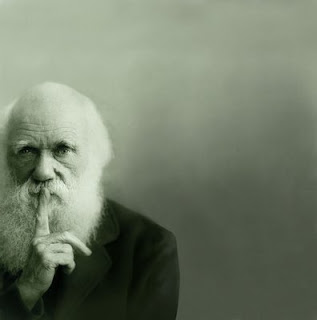 We've just returned from a few weeks in Europe, visiting family in the Netherlands and London, and pottering about in Belgium and France. A highlight of the trip was a visit with my sister-in-law, Mirjam, to the Natural History Museum in London. It is hosting a magnificent and comprehensive exhibition on the life and work of Charles Darwin, Darwin: Big Idea, Big Exhibition, celebrating the 200th anniversary of his birth and the 150th of the publication of “The Origin of Species”. It is just superb, with exhibits of his original notes and letters, of specimens he collected on the Beagle, of some of his extensive beetle collection, and masses of fossils and skeletons demonstrating the changes over time of various lineages. Of particular delight is a selection of herbarium sheets with some of his plant specimens. The NSW Herbarium has plenty of Banks and Solander's specimens which are worthy of adoration, but these are especially significant, as are Hookes' and Huxley's encouraging letters to Darwin when he was so apprehensive about the consequences of publishing “The Origin”.

There are videos discussing exactly what a theory is, and another explaining the processes of natural and sexual selection. A reconstruction of his study in Down House—where he wrote his books—is so intimate, you expect to see him walk in and start examining his specimens. One very touching exhibit is a drawing made by one of his daughters. Apparently, he was always concerned to reuse paper when possible, and he gave her this sheet—on the back of which was a page of his first handwritten draft of “The Origin”.

Happily, the exhibition was absolutely packed with visitors. It is well constructed to be accessible to people with little knowledge of biology or evolution, but sufficiently in-depth to satisfy the obsessive, geeky biologist!

And yes, I bought the t-shirt and the fridge magnet! The magnet is a rendering of the image in one of his notebooks, depicting his first conception of the "tree of life". 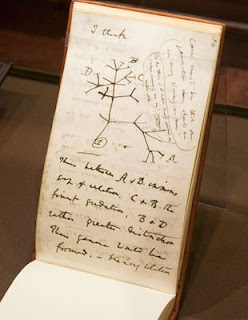 The exhibition goes till 19 April 2009, so if you are even faintly in the vicinity of London before then, attendance is compulsory.

Then, Gerry, my work here is done.

Darwin must be the "in" thing to exhibit at the moment. I saw this one in Canberra http://www.nma.gov.au/exhibitions/darwin/

I'd venture to suggest that it was somewhat less spectacular than the London version. But it did have a live iguana!

G'day Meepish! Yep, it's because of the anniversaries this year (200 years since his birth, 150 since the publication of Origin of Species. London had a live iguana too. I suppose an iguana is easier than an aviary of a few dozen species of Galapagos finches!

Yikes! It's been a long time since I used my Blogger account. It's possibly time I used my real grown up name.

By jingo, it's you! Thanks for visiting, Erin. :) (By the way, what units are you taking next semester?)

Ones that mean you won't see me around much! BIOL246, BBE200, PSY104 and ANTH276. I still haven't decided if I want to end up applying for honours in ANTH and take a human evolution aspect, or head more towards neuro science and cross my fingers that Andy Barron takes me as his underling, so I'm keeping my options open.

Yep, it definitely looks like our paths are diverging. For what it's worth, I think you should go the neuroscience route. It seems to me that of all of the sciences, it's one that's going to really take off in the near future, as the physiological basis of consciousness finally starts to become nailed down. Hey, it could be you with the Nobel! :)